In the earlier days of Android, there were many features you could only get by rooting your phone. Some of those were Wifi hotspot, overclocking, UI mods and App mods. These days, our phones are so fast and rich with features, that overclocking isn’t as necessary unless you’re insane and want Angry Birds to open in 0.10 seconds instead of 0.15. Many people still prefer to root their device though. If you have a rooted device, or are considering it, I’ll help you make that decision by going over some of the best apps for rooted phones or best rooted apps for android. 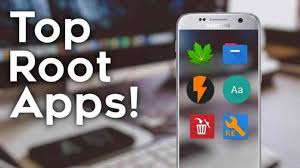 The Essentials
SuperSU is a Superuser access management app. This is going to be the app that lets you control which apps can have root access and which ones cannot. What makes SuperSU better than the other available Superuser apps is its “OTA Survival” mode. This allows you to do OTA updates even when you’re rooted. This doesn’t work 100% of the time, but when it does, it’s awesome. Play store linksupersu
BusyBox is needed for any rooted Android device. Most root apps or features will not work unless this is installed first. So get this installed or I’ll spank you… hard.
Play store link

busybox
Best Apps For UI Mods
Resolution Changer Pro is an app that I’ve had to install on all of my Android devices, at one point or another. It helps when you are using a TV as a display and when you are playing certain games. If your phone is struggling to run a graphics intense game smoothly, then you can drop your resolution a bit and see if that helps. This is definitely a feature you can only get with a rooted device.
Play store link

reschanger
Xposed GEL Settings [ROOT] is great for nexus owners, or anyone running the Google Now launcher. You may have noticed the annoying search bar at the top of your screen. This app allows you to remove it, along with tons of other UI tweaks. Along with hiding unwanted features, you can unlock custom gesture controls, change the homescreen grid, change text colors and change icon sizes.
Play store link

xposedgel
Best Tools And Utilities
Titanium Backup is a great app for not only backing up your apps, but the user data as well. The app has been around for a long time and has over 19 million users. It comes with a cluster of features that’s too long to list here, but you should check it out in the Play store. If you’re concerned about backups and want to pick and choose how it all goes down, then checkout this app.

titanium
Best Screen Recorder App
Rec. (Screen Recorder) allows rooted users to capture video of what’s happening on their Android device. Very few devices come with this feature. In fact, other than a few Xperia devices, I don’t know of any that do. This is an incredibly useful app when it comes to making videos about android. I screen record all the time when I need to show my little sister how to do certain things on her tablet. I just run the app and upload the video to google photos so I can share it with her. It has some really smart features like “Shake to end recording” which lets you shake your device to stop the video record. You can also chose the bit rate and resolution output of your video file.
Play store link

rec
Of course there are many more apps that can take advantage of root access on your device, but these are some of the best. If you want to see more, checkout some of the modules available on the Xposed Framework system. Anyways, that’s about it!

Login to quote this blog

You cannot quote because this article is private.